After a week off the water from having diverticulitis, I am now trying to get past a lung infection. I am on 2 iv antibiotics which I have to administer 5 times a day and it takes 6 hrs of infusion time. That means while i am on the boat I have my iv meds running. It's been really hard to get motivated to do anything let alone charters but the fishing has been so good, it's hard to say no.

Despite feeling crappy this morning I pushed thru it and got to the ramp, I am glad I did. Today I fished with Terry ( who has had three awesome charters with me over past two yrs) and his friend Shawn both from IN.Terry is a cool guy and a very good angler. This was the first time I met Shawn and quickly saw he was also a very good angler and learned he is a marine. My dad served as a marine in Vietnam so the moment I saw Shawn marine corps jacket, I knew he was a great man. I was also blown away when he said his son is in the NFL draft this year so I am really rooting for him in two weeks. I meet really cool people being a guide but this was special. Seeing the pride in Terry's eyes was cool. I already bet his son going to the buffalo bills.

These guys had probably one of the best days I have had on my lake in a long time. The bite was on with a lot of smaller bass but they both had giants. Shawn landed a 8 lb bass with a watermelon seed fluke. It took a good 10 minutes to get her in the boat... I felt instantly cured, it was a big ass fish. The photo doesn't give the fish justice. I was still on my big fish high when Terry landed a 6 lber within 5 mins after Shawn's. The bite slowed dramatically after that but in the last hour we pulled a few more smaller ones in. Hopefully the charters I have the rest of the week produce like today.

Best of luck to Shawn's son, hope he gets that big money and one day a Super Bowl ring.

Terry's fish is the first photo, Shawn's is the second. 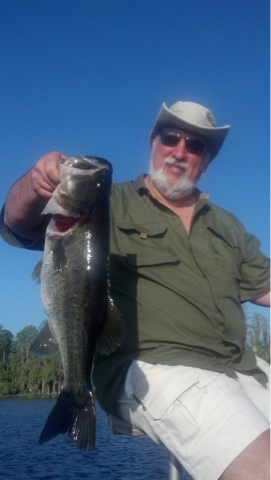 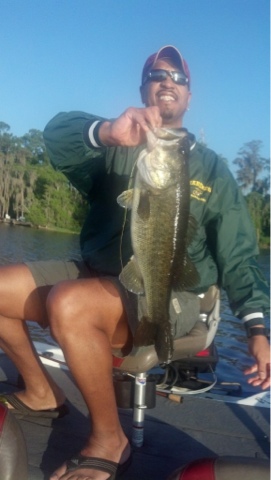 Orlando Trophy Bass
My name is Capt Kevin Przybyl, I am a US Coast Guard Licensed Captain and professional bass fishing guide in Orlando, FL. Prior to moving to Florida, I lived in Buffalo, NY where I was a career Paramedic, devoted to helping people in need of medical care 24/7, 356 days a year for nearly 10 years. Today my wife of 9 yrs, 4 yr old son, and I live in orlando. I started this business over 6 years ago because I love meeting people and creating memories they wont forget. I also use my business to help raise awareness and donations for Cystic Fibrosis. A genetic and fatal disease I have battled since my birth, 33 yrs ago. Today I currently donate $25 of every trip to the Breathe Easy Foundation which has raised over $25k over 3 years. All those funds have gone directly to CF patients or towards projects to improve patient care at adult CF hospitals. This blog will be used to share my story on my battle with CF, and the battle of catching Florida's Trophy Bass. If you are interested in fishing please check out my website at www.orlandotrophybass.com

Learn about my Foundation

Promote Your Page Too

My Client's Catch of the day